What is film at GHS?

It is the study of world film history, theory, and the process of production. During their course of studying a major art form in the world today, students will research, view, and discuss films. They will also create films of their own in the capacity of either writer, director, cinematographer, editor, sound engineer, or in some cases, all roles.

You will study the beginning of film in the world, watching films and learning terms associated with early film. You will also begin the study of the production of films. Students will complete 30 second to 90 second films. 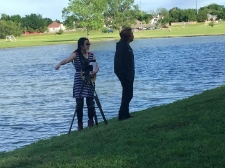 You will continue the study of the history of film and its global impact, watching films from different genres and directors. Students will complete 90 second to 3 minute films.

You will begin an evaluation of the film process and the differences in our culture and cultures around the world. Documentaries will be introduced and studied. Students will also watch and study films of particular directors and their directing styles. Students will complete 3 to 5 minute films.

Using film techniques and production knowledge, students will analyze their knowledge of films, and study more genres and directors. Students will complete a 7 minute film and 60 second trailer.

If you are accepted into the program

You simply need to choose Film I as an elective. You will automatically be placed in the Film I (Pre IB) class.

You will need to get a recommendation from a teacher at your campus, return it to your counselor to enroll in the class. The letter must be forwarded to Film at GHS.
*Note:  You may substitute Freshman Academy for Film I (Pre IB). 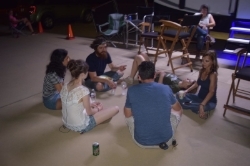 For full IB diploma, you must test in 6 subjects. For the 6th subject, you are allowed to choose the area in which you wish to test. IB Film is one of those choices. You must take both IB Film 3 and 4 to be able to test.